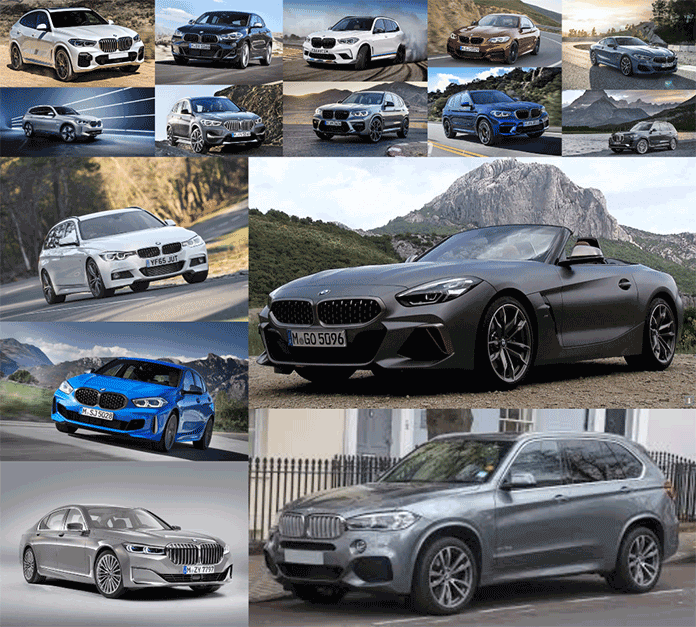 The latest model BMW cars are upgraded versions of the existing cars. So why should you buy the latest model BMW? We’ll give you several reasons why, as you read about the upgrades in each car model. To begin with we would like to bring your focus to the main reason why manufacturers keep releasing newer models of existing cars. You are right! The new model car is an improved version. Issues or drawbacks in an existing model are resolved in the newer model.

But there is more to a new model car. When BMW AG decides to launch a newer model of an existing car it tries to make it better than the old one. The focus areas of betterment are safety, fuel efficiency, cost, and performance. Aesthetic upgrades of the interior and exterior of the car goes without saying. Engine upgrades for a better performance is also an important area of consideration. All these put together ensure that the latest model gives you a better, safer and cheaper drive. So if you don’t upgrade your car you end up losing money.

The BMW 8-Series will be available in two styles – the coupe and convertible. The 4 door ultra luxury car is an epitome of elegance and class – a cut above the rest. The 840i is the base model with a twin turbo V6 engine. The higher model M850i is a bit more powerful with a V8 engine. The interior of the car are luxurious and leaves little to be desired, and also accounts for the high price tag.

The BMW X5 is one of the most popular selling vehicles. There are no changes planned in the design for the latest model of this mid-sized BMW luxury SUV.

A few perks in the latest model will include a few new body color options and new tires. The 2021 BMW X5 will also sport some enhanced interior upgrades. The manufacturers are also planning a hybrid version of the X5 which we can hope to see soon.

The BMW Z4 has a 2.0L 4 cylinder engine. The upcoming model of this sportster will have the same engine with a few minor tweaks.

Worth noting is the addition of an enhanced audio system from Harman-Kardon. The 2 door convertible will retain the soft hood which reduces the weight and improves performance. We can also see a bit of fine lining in the body for better aerodynamics.

BMW X1 has found its niche in the subcompact category with its refined performance. Despite the stiff competition by new rivals the X1 is a leading contender.

The upcoming model will feature a slight facelift in the front grill and the addition of LED lights. There will also be a choice of 3 additional colors. The panoramic sunroof, cruise control, push button start etc. all add up to make this a very desirable car. It has a 2.0L 4 cylinder engine and an 8 speed transmission with different gear ratios.

The BMW X2 is quite new and hence we don’t expect to see many changes in the upcoming model. However, there is news that the M35i will be getting a sportier look.

Slight tweaks to the exterior appearance include a wider grille and some changes to the head lamps. An upgrade in the infotainment system and some improvement in the safety features are also on the cards. No changes under the hood to the 2.0L twin turbo engine.

The BMW X3 M is a crossover and fits into the luxury mid-sized SUV category. Ever since its launch in 2003 it has created a firm wedge for itself in the market. This all wheel drive powerful vehicle incorporates a plethora of safety features. It delivers a high performance with its 3.0L 6 cylinder engine. The upcoming model will have a few upgrades in the interior technology and minor exterior changes.

The BMW X4M is a sports activity coupe with a 3.0L turbocharged Inline 6 engine. The new model will have some improvements in the suspension and brakes.

The apparent flaws in the existing model are being addressed. You can expect some minor upgrades in the exterior styling for a more suave look. The new X4M will have enhanced safety features including forward collision warning which is equipped with an automatic breaking system. Other safety features include parking sensors, blind spot monitoring etc.

The latest model of this car will have some aesthetic improvements in the interiors as well as on the exterior to give it a fresh look. The latest model focus is on safety and comfort. A slight engine tuning will ensure an enhanced performance and great pickup.

The BMW X6M is more of a crossover mid-size luxury SUV.

It has large powerful disc brakes as a part of its advanced safety features. The upcoming BMW X6M upholds the stature of the M Badge with elegant interiors. The car has a 4.4L V8 twin turbo engine. It’s an all All Wheel Drive and has an 8 speed automatic transmission.

The BMW X7 is a large and spacious SUV with no shortage of luxuries or space. This is a powerful vehicle with a V8 engine under its hood. The higher model is the Alpina XB7 which has twice the power and costs twice as much.

For its size the car is very quick and agile to maneuver. The new version has a few interior technology additions to enhance the cabin experience such as heated seats, armrests and the steering wheel. The car also has the addition of a remote start and upgraded safety features.

The BMW iX3 is a complete electric car which has an impressive 286 mile range.

This rear wheel drive small SUV also comes in an all wheel drive model and has a 74 kWh battery with fast charging capabilities. For those in a hurry you can get a 60 mile charge in a mere 10 minutes.

The BMW will be launching the 1 Series hatchback in the US soon. The 1 Series coupe and convertible have been around but will be facing some upgrades for the next year. The interior upgrades will include a futuristic design and elements for the dashboard.

Buyers also have the option of a panoramic sun roof and an advanced version of a parking assistant. Other technology perks include using your smart phone as a key and a voice recognition personal assistant.

Buyers have an option of a hard top or a removable soft top. The latest model will have superb exterior styling with minimal changes under the hood. The car will also have some interior tech improvements.  In all, it is a value for money car in the affordable range.

The BMW 3-Series is a mid-level competitive luxury car.

The highlights of the cars in this series are its quick acceleration and fuel economy. This five seater car comes in a rear wheel drive as well as all wheel drive options. In the coming year we can also expect the new 330e hybrid model of the BMW 3 Series.

The BMW 7 Series is the flagship in of the BMW lineup. This sedan has it all and lacks nothing. The car is equipped with advanced technology features and refined interiors, delivering a very smooth ride.

It has a well-balanced blend of classic and contemporary exteriors producing an elegantly stylish car. The 740i is the base version with a 3.0L 6 cylinder engine. The 750i is equipped with a 4.4L 8 cylinder engine. The 754e is the hybrid version of the BMW 7 Series and has a range of 16 miles. The top and the most expensive model of the 7 Series is the M760i, which costs $157,000. However, the most powerful model in the 7 series is the Alpina B7.