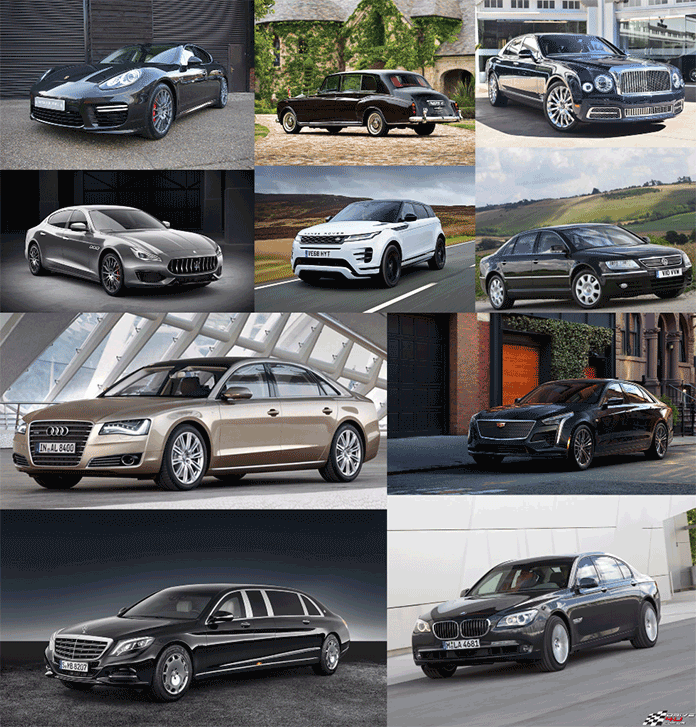 The powerful, rich and famous, including those in government office need to ensure their security at all times. To warrant the safety of their lives they need to ensure that they remain in a secure environment.  They are vulnerable targets when they are on the move but armored cars have changed that. How do celebrities get away from mobs hounding them? All those in positions in power fear assassination attempts.

Bulletproof vehicles have been around for ages. Constant upgrades in the vehicle as well their security features enable these cars to withstand attacks of newer dimensions. Most bullet proof cars are hermetically sealed, have night vision, multi-layered ballistic glass and the ability to run on flat tires.

Let’s looks at some of the most popularly used armored vehicles:

The Mercedes Benz car is reputed for its speed and agility with a strong and study body, thus making it a great getaway vehicle. The armored Mercedes-Benz Maybach Pullman Guard is a 21 foot long stretch limo and is packed with elegance and class which sets it apart from the rest. It has an impressive VR9 level of protection and the blast resistance which conforms to the requirements of the Directive ERV 2010. The interior cabin of the car is extravagantly spacious and luxuriously designed. The Maybach Pullman Guard has a twin turbo V-12 engine and a top speed of 99 mph.

The Volkswagen Phaeton is a popular car among dignitaries in Europe including the Pope. The interior and exterior of the car is customized as per order. This feature puts the Phaeton the same league as the Rolls Royce and Bentley. This high security luxury vehicle is fitted with bulletproof laminated glass and a tough body with the capability of protecting its occupants from a range of vicious attacks. The car is equipped with an electronic immobilizer for emergency situations. The plush and luxurious interiors of the Phaeton are a striking contrast to its unassuming exteriors.

This Italian car is the preferred car of Italian dignitaries. The Maserati Quattroporteis best described as ‘an icon of Italian elegance’ with its stylish looks. The Quattroporte was originally built to be a luxury sports car and it still retains its speed and agility. The exterior is reinforced with tough manganese steel plating and polycarbonate windows. The interiors are opulent with customizable fittings. The V8 engine and the dynamic sports handling makes the Maserati Quattroporte an exciting car to drive.

The Phantom VI is a British car and popularly used as an official state car around the world to carry important dignitaries. This armored luxury sedan can withstand gunfire and explosions. It includes all the standard security features including a rotating roof emergency escape hatch and blast seals. It has a superior suspension and reinforced braking. The interiors of this car are luxurious and include a high tech entertainment and sound system. Under the hood it sports a Turbo V12 engine with a load capacity exceeding 2.6 tons.

The armored Range Rover Sentinel SUV is a combination of ruggedness and luxury. The off road capabilities of this vehicle with its supercharged 5.0L V8 engine are immense. The windows are completely sealed and only the driver’s window opens a mere 6 inches. The SUV has a sealed tailgate with an escape hatch from the rear glass. The vehicle is designed with thick bulletproof steel and 2 inch thick ballistic glass. The armored body can withstand TNT blasts and other explosives such as improvised explosive device fragmentation blasts. The Range Rover Sentinel is the choice of vehicle by the British Royal Family.

The A8 is Audi’s most secure car. This armored luxury sedan has a long wheel base and the body is reinforced with ultra-tough material to make it all resistant. It can withstand all types of explosives and gunfire. The Audi A8 limo meets the VR10 protection classification. The car is fitted with two compressed air cylinders to ensure that there is a continuous flow of fresh air inside the car in the event of a criminal attack. The boot houses a second backup battery just in case something goes wrong. The Audi A8 has an inbuilt fire extinguishing system which caters specifically to the fuel tank, the engine compartment, the underbody of the car and the wheel housings.

The A8 is Audi’s most secure car. This armored luxury sedan has a long wheel base and the body is reinforced with ultra-tough material to make it all resistant. It can withstand all types of explosives and gunfire. The Audi A8 limo meets the VR10 protection classification. The car is fitted with two compressed air cylinders to ensure that there is a continuous flow of fresh air inside the car in the event of a criminal attack. The boot houses a second backup battery just in case something goes wrong. The Audi A8 has an inbuilt fire extinguishing system which caters specifically to the fuel tank, the engine compartment, the underbody of the car and the wheel housings.

The Porsche Panamerais a sleek and impressive looking car. This armored vehicle has a ballistic steel body making it resistant to a range of violent criminal attacks. It is a quick getaway car with its high powered 4.8L V8 Twin Turbo engine. It has a B6+ protection level and the security highlights are the armored radiator, battery and gas tank. The car is stylish on the interior and exterior, with a range of desirable luxury features.

This grand looking piece of machinery is an epitome of class. The Bentley Mulsanne is a full sized luxury car with features that invoke envy. The car has a massive interior cabin space with mood lighting. The car is built with armored plates and can withstand high powered bullets, bombs and explosives. It is also secured against chemical assaults. The armoring level of the Mulsanne is A9/B6+ and the level of protection can be further customized.

The President of the United States uses the Cadillac CT6 as his official car. Over the years this highly secure bullet proof Cadillac CT6 has come to be known as ‘The Beast’. The bomb proof limousine is known to be the most secure car on the roads and can literally be called a moving bunker. It can withstand any known kind of attack. The car is designed like an Escalade sedan with a large, tall and heavy body weighing around 20,000 pounds. It is built on a GM truck chassis and can comfortably seat 7 people.

What is the best armoured vehicle?

The best known and most heavily armoured car is The Beast, the vehicle of choice of the president of the United States of America. A bullet-proof and bomb-proof Cadilac, it is more a mobile bunker than a car and is built around the chassis of a GM truck.

Is it illegal to have a bulletproof car?

Although once restricted to military vehicles, bulletproof glass and bodywork are entirely legal to install. From Celebrities to sportspersons to politicians choosing a car that has been designed to withstand shocks, and lamination that makes the glass more durable and sturdier has become popular and has saved hundreds of lives.

How much do bullet-proof cars cost?

Depending on the style and purpose you chose it for, bulletproof vehicles start at around $155,000 with the Rezvani Tank, which does look like a military, off-road vehicle or even $120,000 for the more everyday looking. BMW X5 F-15 Security Plus. The more presidential Land Rover Sentinal will set you back a cool half-million dollars.

Can a civilian buy a bulletproof car?

Yes, a civilian can buy a bulletproof car. The only object between anyone and a bulletproof car is the price tag. They are becoming more common with celebrities and corporate dignitaries, especially in the dangerous world that we find ourselves in and if you can afford one, then nothing is stopping you.