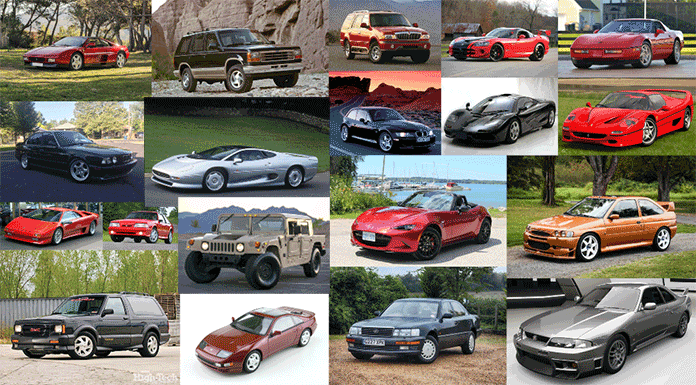 The 1990s was an era when technological advancement was at its peak. The automobile industry was riding high in churning out cars one better than the other. The aerodynamic bodyline and precision engineering focused on speed and acceleration. Car manufacturers were going crazy trying to build supercars. In the bargain we have seen some of the finest cars that were ever made during this era. Let us take a look at some of the best cars from the 1990s and learn what makes them so special.

Year: 1992
The Hummer H1 was the all-terrain vehicle of the 1990’s. With massive tires and fender grills this monster truck is what you would imagine the bad boys driving around in. The H1 had the capability to wade through 30 inches deep water and climb steep slopes that looked near impossible. Though it had a stereo the interiors were far from comfortable.

Year: 1990
The Lexus LS400 was released in direct competition to the Mercedes S Class. This was the first Japanese luxury car for the global market. BMW, Jaguar and Mercedes were a bit shaken to see the LS400 biting into their space. And true to their fear the Lexus turned out to be better than all of them. This powerful car exudes a safe and secure feeling with its smooth and comfortable ride.

Year: 1991
The Ford Explorer is a high spirited versatile vehicle which is ideal for towing great loads. Equipped with a 4.0-liter V6 engine the Explorer still has its niche market. The Explorer is a highly safe and dependable car. It was built for utility and did a fine job.

Year: 1998
The Lincoln Navigator was the SUV with a luxurious interior in its heydays. Today we have a different set of standards which defines a luxury SUV. The Lincoln Navigator is a powerful vehicle and can plough through all kinds of terrain. It has a 5.4L V8 engineproducing 230 horsepower.

Year: 1992
The GMC Typhoon is your typical rugged all weather utility truck. The truck has an outrageous acceleration for an all-wheel drive vehicle. It is powered with a massive 4.3L Turbocharged V6 engine. The typhoon interiors are well designed with plenty of black leather on the seats and other part of the cabin as well.

Year: 1990
The Nissan 300ZX is an alluring vehicle and delivers a superb performance. It has a 3.0L Turbocharged V6 engine. This low bodied, aerodynamic sleek car had people marvelling at Nissan’s talent for creating something quite so exquisite. The car has rewarding dynamics and marvellous interiors.

Year: 1992
The BMW M5 is a high performance car comes with a 4.9L V8 engine which produces a grand 310 horsepower. Don’t be fooled by the bland and unassuming appearance of the M5. When in action it takes you completely by surprise with an excellent acceleration. It is also the fasted of the BMW 5 series.

Year: 1990
The 1990 MX-5 is Mazda’s retro car. It is a very conventional sports car with a 16 engine. In 1991 the car witnessed an upgrade to a turbo charged engine which pushed the power from 114bhp to a whopping 150bhp. This was a winning decision and led the MX-5 to victory in a spectacular racing event.

Year: 1998
The BMW M Coupe was conceived to support BMW’s endeavour to join the motor sport league. A power packed car performed with full gusto and brought home accolades of victory several times. With a unique set of wheels and powerful brakes the coupe packed a S54 I6 engine delivering a 315 horsepower and a remarkable acceleration.

Year: 1998
The Ford Mustang SVT Cobra was not just any car. It had a special hand built V-8 engine. The car was a recreation of the Shelby Mustang GT-350. The 1998 Mustang SVT Cobra got new alloy wheels, independent rear suspension and a good prep up. The car is smooth, quiet and very comfortable to drive.

Year: 1996
The 1996 Ferrari F50 was smooth and fast, a car of the future. This was a limited edition model and had a sleek body line with prominent rear fins. The F50 was quite a change from its belligerent predecessors. It mounted a 4.7L naturally aspirated V12 engine supported by a 6 speed manual transmission and was capable of an amazing acceleration.

Year: 1997
In the 1990’s Japanese cars were considered the coolest cars in the US for their neat and sleek look. The Nissan Skyline GTRwas an all-wheel drive turbocharged coupe that was instantly popular for its looks and performance. However, the Nissan Skyline models didn’t conform to the regulation stipulated by various agencies for automobiles, and hence was not able to continue manufacturing in the US.

Year: 1990
The Chevrolet Corvette ZR-1 delivered a statement of excellence with a spectacular performance. It did the unimaginable while conforming to all the government regulation for safety, noise levels, exhaust emissions and fuel economy. And together with that, the car also had spectacular acceleration and speed.

Year:1992
The Dodge Viper is described as a car with real venom. As soon as it was launched it headed straight for the top and became America’s premier sports car. The Dodge Viper was economically priced and gave its peers real competition in the marketplace. It is a two-seater roadster with very attractive exterior styling.

Year: 1993
Among the Ferrari 348 the TB Catalyst was the most popular. It had a sleek and very distinctive appearance. But there was more to this car – it pushed the limits. In a bid to make the best car Ferrari modelled the 348. The TB was fast and furious with a gripping acceleration.

Year: 1992
The Jaguar XJ200 was a super car and a crowning achievement. The sleek car with pop-up head lamps and extremely powerful engine was designed as a racing car to compete with the XJR-8. The Jaguar XJ200 with its swift acceleration put on quite a performance. It was a masterpiece from Jaguar but also ended up becoming a millstone.

Year: 1990
The Lamborghini Diablo was a car that got your pulse racing, and certainly was not a vehicle for the weak hearted. This brutal car was designed for racing, and speed was its second name. Of course it is a far cry from the supercars of today, but in its heydays it made an indelible mark with its laudable performance.

Year: 1994
The McLaren F1 was a racetrack winner and stood head and shoulders above the others. It has been acknowledged as one of the best cars ever. Sitting in the car you get the feeling of being in a jet which can take you anywhere in a flash. It had an unmatchable mechanical precision which delivered an amazing performance.