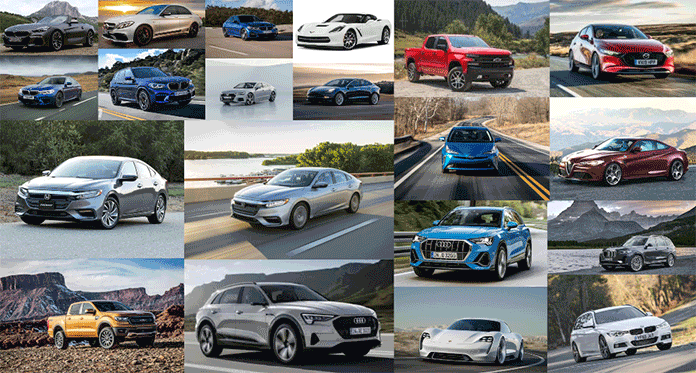 Each year automobile manufacturers bring out new models of cars. The main focus of these newer models hinges on upgrades or improvements of a few core factors – performance, looks, fuel efficiency and price. It may not be able to encompass all these factors in one car but they certainly try to ensure that they get as much in.

If you are planning to buy a new car now or in the near future you should have a look at this list of cars that are scheduled to release in 2021. It is worth waiting a little, and in the meanwhile you can save up a bit more towards your car.

In this article we are focusing primarily on cars that are value for money. So what does 2021 have in store for us in the way of best value cars? Let us take a look.

The timeless Ford Mustang is expected to amaze its wide fan base once again with the highly anticipated 2021 Ford Mustang Mach E. With an estimated price of just under $45,000, the Mach E will be powered exclusively by electricity and will be available with 2 battery pack options and rear or 4 wheel drive.

The iconic GTV range is set for a fancy revival in 2021. While information is scarce about the new Alfa Romeo GTV, it is expected to run on the same platform as the Alfa Romeo Guilia sedan and the Alfa Romeo Stelvio. Over and above that there is news that Alfa Romeo is also working on developing a hybrid version of the GTV.

The new Tesla Model Y electric car is expected to take the market by storm upon its release in 2021. It’s already available for order in China, and will offer 4 different models with the standard trim giving a satisfactory 5.9 seconds from 0 to 60 mph and a top speed of 120 mph.

Ever since its first release in 2004, each generation of the Hyundai Tucson brings innovation and fresh perspectives at a graciously affordable price. The 2021 Tucson will have a modified exterior design and is said to be loaded with a practical interiors and upgraded safety features.

Kia is known for its great cars at a super affordable price. The new Kia Seltos is a firm SUV with a neat body design. It has two variants but the 1.6L turbocharged vehicle is the cheaper model and exudes sufficient power. The AWD is an optional feature. The test rides have proven that the car is highly fuel efficient.

The RAV4 Prime is the most recent car in the Toyota line up and is a typical plug-in hybrid. As an electric hybrid the RAV4 Prime will have its niche supported by its spectacular pick up which delivers 0 to 60 mph in an amazing 5.8 seconds. It has an electric driving range of over 40 miles, backed by great fuel efficiency.

Mazda is making its entry into the electric car market with the MX-30. This all-electric car runs on a 35.5 kWh Lithium Ion battery pack. The Mx-30 is a subcompact crossover with a front wheel drive and said to have a peppy acceleration. It will be available in four trims with the sports models being the cheapest.

The Tahoe is a Chevrolet’s latest SUV. This spacious vehicle has a lot to offer with an air suspension, very spacious interior and great family friendly features. There are a large number of trims to choose from. The Tahoe is also designed for great fuel efficiency.

The Ford Bronco is coming back with a bang. The upcoming model will have more versatility, punch and drive. The new cool and retro look offers a removable doors and roof. The interior features are a definite upgrade and completely waterproof in case of a sudden shower. The best part is that it is very comfortably priced.

The ID.4is among Volkswagen’s initial steps into the range of electric cars. The all electric SUV will have a drive range of 310 miles and fast charging capabilities. The EV has an impressive exterior styling and is powered by a single rear motor. The low introductory price makes it a good buy.

The BMW i4 is a novel concept of an electric luxury car. BMW has out done itself in making a luxury car with an affordable price tag. This elegant and classy car delivers a superb range of 300 miles from its 90 kWh battery.

The Cadillac Escalade is a full sized powerful SUV fitted with advanced technology and amazing features, and for what it is worth the car is very nominally priced. It is an embodiment of innovation with its futuristic features taking the car to the next level.

The Buick Encore GX is a semi luxury SUV with a 1.2L 3 cylinder engine. The exterior design is very eye catching. The interiors are spacious with some compelling features. The SUV embodies a number of desirable safety features including forward collision warning and automatic emergency brakes.

The Mercedes-Benz EQC is an electric SUV with a massive 402 horsepower. This eagerly anticipated car is scheduled to hit the market in 2021. It has a strong body with the familiarity of the Mercedes trademark. The SUV is said to have a 200 mile range and provides a smooth and efficient drive.

The upcoming XC40 Recharge is an upgraded version of the gas powered XC40. The car is powered by a 75 kWh battery and delivers a range of over 200 miles.The car has two motors to power the front and rear wheels giving it a powerful all-wheel drive. Volvo has priced this car decently.

The Byton M-Byte is a Chinese electric SUV which will be launched in the US in 2021. There has been much curiosity about this German designed car which was engineered in the Silicon Valley and is being manufactured in China. The Byton M-Byte claims self-drive among other interesting features. The entry level variant will have a 72 kWh battery with a 224 miles range.

The Ram Dakota is a mid-sized pickup truck in an affordable range. Speculation states the Dakota with have a V6 engine which will probably be paired with an 8 speed automatic transmission. The pickup is expected to match the general expectations of off road capabilities.

Rivianis changing the trend with its all-electric pickup truck. The futuristic R1T promises a driving range which exceeds 400 miles. The base model will have a 105 kWh battery and a standard all-wheel drive. The adjustable air suspension allows you to alter the ground clearance from 8” to 14”. A unique feature of the Rivian R1T is its ability to do a tank turn with its left and right wheels turning in opposite directions.

The exterior design of the Tesla Cybertruck is unlike anything we have ever seen before. It almost appears to be an alien vehicle come from outer space. The all-electric Cybertruck has sharp edges, is scratchproof and resistant to dents because of its solid stainless steel body. This all-wheel drive truck has a driving range of over 500 miles and is being introduced at an unbelievably cheap price.

The Nissan Frontier was one of the most affordable trucks available in the US market. The news of its relaunch brings great anticipation. The mid-sized pickup truck is expected to have some design upgrades with an even boxier look and more pronounced fenders. It will have a 3.8L V6 engine and an automatic transmission.