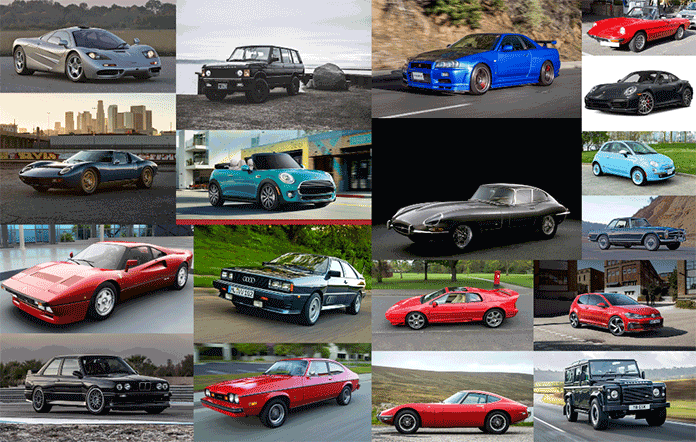 The term “Coolest Cars” is reserved for a category of cars that rode the roads between 1970 and 1990.We have seen faster, sleeker, and better cars since then, but they hold a special place in the hearts of people. Some of the coolest cars may have been ahead of their time with a quick acceleration and an exceptional performance. Some of them were built with futuristic designs and involved engineering feats that we can still marvel at.

While some of these cars maybe on their way out, they will still have a special place in our hearts. Some have been upgraded and modernised, but the classic models had their own charm. Let us take a look at these cars with a little trip down memory lane and reminisce about the good old days and their cars.

The Toyota 2000GT is a limited edition car and only 62 were built. The 2000 GT has an ostentatiously long bonnet and a tiny rear in comparison. This smooth and futuristically aerodynamic sports car was a real dream to drive in its hay days with an extremely powerful

2.0L I6 engine producing a grand 150 horsepower and was equipped with a 5 speed manual transmission.

The Nissan Skyline R34 GT-R is one of those legendary classics that tend to live on. This car was manufactured for a select market in Australia, New Zealand and Hong Kong. It is powered by a 2.8L twin turbo I6 engine and has a 6-speed manual transmission. The Nissan Skyline R34 GT-R has box shape and a very prominent wind spoiler, perched high enough so that you don’t miss it.

The Ford Capri shared the privilege of being equated to the Mustang. It is believed that the Capri was a polished version of the iconic Mustang for the European market. The Capri is powered by a 3.0L Essex V6 engine with a rear wheel drive. This sports car has a posh interior and a sleek exterior.

The BMW E30 M3 has a chiseled appearance and is labelled as the best BMW car ever created.

It was designed with a powerful 2.5L S14B25 I4 engine delivering a grand 192 horsepower. As a sports car it was a straight winner, not to miss the swift acceleration. The E30 M3 can be described as a very special car with superb handling, and an old school character generously covered with modern features.

The Alfa Romeo Spider captured the attention of people with its outrageous exterior styling. The Spider took the engineering technology one step further with twin cams, dual weber carburetors encompassed in an all alloy engine. This convertible with all its fancy technology came at a higher price tag but was a rage.

The Range Rover Classic built in the UK started the fad that we have today for SUV’s. The utility vehicle was ideal for transporting cargo but could also double as a family car for a Sunday outing. It changed mind sets and began a new trend which is now quite popular. It was a heavy, powerful and large vehicle that commanded space and showed muscle.

The classic Fiat 500 with its rounded exterior progressed to a neater chiseled look in the years to come. Today the Fiat 500 is still around and going strong with upgrades for better performance and a styling that conforms to the present times. The Fiat has always maintained a tiny look but the engine tells a different story.

The Volkswagen Golf GTI came to life with an Audi 1.6L 110 horsepower engine. The car was swift and agile and most of all – it was a pleasure to drive. The GT1 found its niche among the sports cars displacing them a little with its presence. This 4 speed manual transmission hatchback has seen some engine upgrades but the exterior still maintains quite a bit of its original design.

There is no otherMercedes-Benz ever built which compares to the Sports Light. The 280SL was quick and agile with a powerful engine and cutting edge technology. The Mercedes-Benz 280 SL was nicknamed pagoda because of its peculiar roof. The most recent version of the 280 SL has a 3.0L M198 I6 engine with a 4-speed manual transmission.

The Ferrari 288 GTO has quite a history behind it. The weirdest part is that it was made as a street car to support a race that never happened. Anyhow we had the brilliant 228 GTO supercar on the streets as a fast car zipping down streets. It was built with a twin-turbo V8 engine and a 5 speed manual transmission.

The McLaren F1 was a supercar that surpassed all its rivals with a blind sweep. It was built with mechanical precision to take-off with an unbelievable acceleration. A complete aerodynamic exterior design enables the car to slice through without disturbing the atmosphere around. The F1 was equipped with a 6.1-liter BMW S70/2 V12 engine and produced a 618 horsepower.

The Quattro is the most legendary of the Audi line up. It comes from a lineage of racing cars and the performance is nothing short of outstanding. The Quattro is an all-wheel drive and was off-roading before other cars even knew what it meant. This tough car has a great grip and awesome handling with its 2.1L turbocharged 5 cylinder engine under its hood.

The Porsche 911 was a car with eloquent style. This timeless classic is still dominating its space and category of cars. All said and done the Porsche 911 is an engineering feat which overrides any flaws in its exterior design. It has a rear engine similar to the VW Beetle. Age has mellowed the Porsche 911 down from a hair-raising terror to a docile supercar. But it still outperforms its rivals.

The classic Lotus Esprit was built to pitch it against its rivals Porsche and Ferrari. However it didn’t quite meet the mark, and fell of its face to a bad landing with a few glitches restraining its performance. The wedges of sharp creases on the exterior define the two-seater Lotus Esprit which stood out in a humbler tone.

The Mini Cooper is a short bodied stout car and the shape hasn’t changed much over the course of the years. In its early days this micro car revolutionized the small car segment. John Cooper was responsible for getting the Mini Cooper into the racing game. And this was how the original car underwent a complete overhaul to make it a speed machine. Currently the Mini Cooper has a 1.3L I4 engine.

The Miura named after the Spanish fighting bulls was designed to match the bull force with a V12 engine mounted in the rear. The Lamborghini is smooth and quick, and designed to outdo the Ferrari. The Miura helped accomplish this challenge with its precision engineering. It was the fastest and also the most stylish car on the roads.

From the typical box shape the Land Rover Defender has come a long way to smoothly rounded exteriors. However the vehicle has not lost its rugged charm that once had people spellbound. The Defender made a delayed entry into the American market and a few years down the line made a quick exit due to lack of safety features. But a comeback with an upgraded and improved model is due soon.

The stylish Jaguar E-Type is in a league of its own. Designed as a sports car it included some advanced technology to deliver the required speed and performance. The car interiors were safety aligned and included some good tech making it suitable for take some risks. It had a 3.8L XK I6 engine.