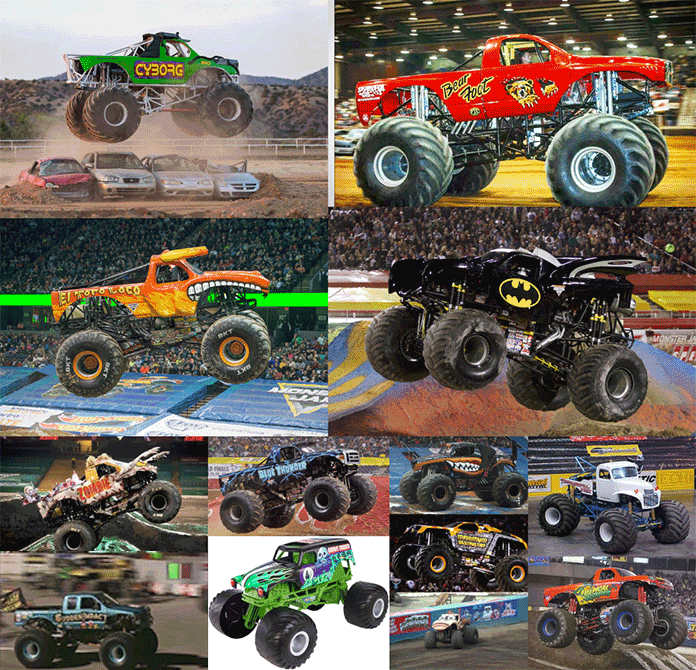 Monster Trucks are now becoming common with the number of different types we see. These vehicles, however, cater to a niche segment of society and are mainly designed for competitive events. They are not your regular family car or one that you would go to office in. Monster Trucks are not attractive and can be best described as an eyesore. They stand out and don’t seem to fit in with the surroundings. But if you are planning to drive over rocks, ditches and into slushy marshland, then a monster truck would do. They are rugged and hardy vehicles.

Monster Trucks were originally created to crush objects and not for dirt track racing. Anyone with a monster truck would like to show off their vehicle, but unfortunately there are not many admirers around. Most onlookers find it an obnoxious sight. Monster Jam is a sporting event where all Monster Truck owners can display their ravenous beasts and compete with each other, trying to prove who has a better vehicle by crushing cars and other large objects in their way and fly into the air.

Here’s a list of some of the best and most popular monster trucks. Some of which have won championships and others are noted for particular admirable features:

The Grave Digger was originally created by Dennis Anderson from parts of other vehicles scavenged from junk yards. After being given an opportunity to prove itself at a Monster Jam event, the vehicle was redefined with better parts. Today Grave Digger holds several titles and actively competes in Monster Truck competitions around the world.

Similar to its name the Monster Mutt is an embodiment of a dog sprouting wheel and growing to an abnormal height of 12 feet. This weird looking truck actually has flappy dog ears, which goes down well with the onlookers giving it a huge fan following at sports events. This monster faithfully competes in every Monster Jam event and is well loved for its strange cuteness.

Bear Foot is a monster truck which was originally built by Jack Wilman and Fred Shafer. It has several Monster Truck event titles to its name. The truck gained a lot of popularity when it appeared in a Volvo commercial.

The Batman won the Monster Jam World Racing Champion consecutively for 2 years in row (2007 and 2008). As the name suggests the original design of the Batman was inspired by the Batmobile (the car used by the superhero character Batman). This explains the wings projecting off the back of the truck. In 2013 the Batman saw some upgrades which included a new chassis, a more powerful engine and smaller silver lined wings.

The Raminator is a huge and powerful truck. This 10 feet high and 12.5 feet wide truck is the currently the fastest on the circuit. The ugly looking huge tyres each weigh over 900pounds and can easily crush any object in its path. The Raminator has won many awards and in 2014 it set a new world record.

The TowasaurusWrex is a beastly truck which has been around for a long while and is still going steady. The initial design of the TowasaurusWrexwas in resemblance to a 1946 tow truck. Over the year it has experienced several upgrades to its chassis, engine and body, but it still retains its original look of a tow truck.

The Cyborg started out as a 2WD which had several drawbacks especially in the monster truck freestyle competition. It was later upgraded to a 4WD giving the driver better control and movement power. The Cyborg has made many track appearances but has been off the circuit since 2016.

The El Toro Loco is a crazy looking monster truck that has a huge fan following. It competes regularly in Monster Truck events even though it has changed many hands over the course of the years. The body style if the El Toro Loco resembles a bull and the forward pointing horns on the roof depict a crazy bull.

The brightly painted Sudden Impact was created by John Seasock. He drove it for many monster truck events. In 2005 it was bought over by Brandon Lagarde and has made numerous appearances on the circuit. The Sudden impact is also known as “Ground Pounder”.

The Tropical Thunderwas originally built out of a Chevy Silverado and was called Nite Life II truck. The truck was later upgraded to a monster truck and renamed Tropical Thunder. In 2016 the truck was converted to Enforcer and the original vehicle was scrapped and today rests in an Egyptian salvage yard.

The Zombie was a custom built monster truck which was named by the fans. The truck underwent several cosmetic changed to match its name. This included the painting of blood on the side and the addition of arms. At monster truck events Zombie fans paint their faced and dress as zombies. Today there are several versions of the Zombie truck on the circuit.

The Insider’s Guide to the Best and Most Affordable Cars