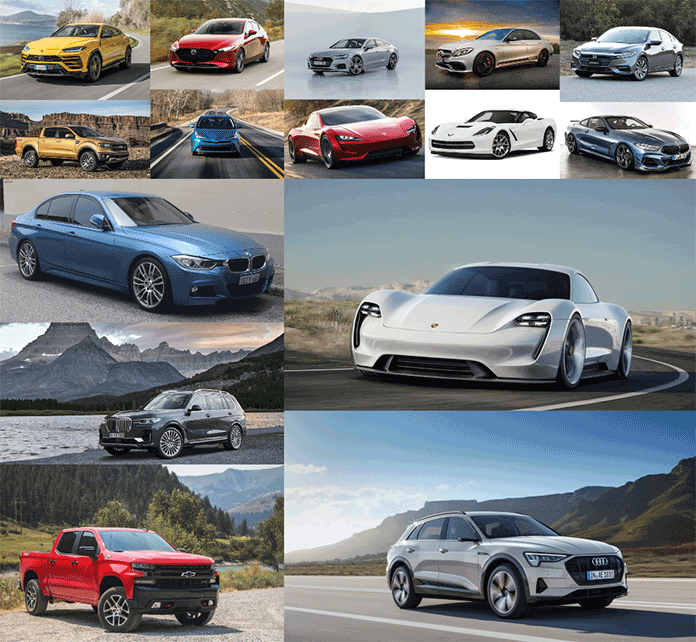 Each year there are newer and better cars that you can look forward to. Electric cars are entering the market space in a big way and something that we should not overlook. Our research has led us to these 15 new cars that are about to enter the market space in the coming year. Being forearmed with this information can help you make an informed choice for your next purchase. We’ve made it a point to make mention of the new features and upgrades in the latest models of these brands.

We’ll keep this list updated as new cars keep launching and making waves. So stay tuned to know what is hot and happening.

The Tesla Roaster is all set to lead the race with a magnificent pickup of 60 mph in a mere 1.9 seconds. What more, it can cover quarter of a mile in a record time of 8.8 seconds. Tesla is out in the front with the Roadster. The latest model of this sleek looking powerful sports car can seat 4 people. The electric car has a 200 Kw battery which can cover a generous distance of 620 miles. The car is fitted with two motors located in the front and back powering all the 4 wheels.

The Audi E-Tron is making headlines as an exciting electric SUV that is going into mass production and is ready to flood the market soon. The latest model has a better range totaling to 222 miles for its 95 Kw battery; and has charging points on both sides of the vehicle for user convenience. To carve out a niche for itself Audi is launching this SUV in the US market with a price drop. The Audi E-Tron Sports-back model is also in the pipeline.

The Audi A7’s performance matches its great looks. The hatchback has generous cargo space contrary to the image it projects. The car houses great infotainment with touchscreens for various car functions. The interior luxuries include heated and ventilated seats, a panoramic sun roof, sound system from Bang and Olufsen, and more. The exterior attractions include snazzy headlights and taillights with futuristic animations. The Audi A7 hybrid encompasses a turbo charged four-cylinder engine, which generates 362 horsepower.

The BMW 3 Series embraces the new generation design in technology and this is apparent in its engine and suspension. This luxury sedan encompasses several alluring features such as the reverse assistant, great safety features and high tech infotainment.  The hybrid version has a good electric range of 23 miles before seamlessly switching over to the turbo charged gas powered 2.0L engine.

The BMW 8 Series is designed specifically for those who appreciate the finer things of life. This extravagantly luxurious Gran Coupe is a spectacular spots car with a choice between 2 door and 4 door models. The twin turbo charge V8 engine provides a scintillating driving experience. The interior features include a spacious interior cabin with elegant trims, a large touchscreen of 12.3 inches, a Bowers & Wilkins stereo system and more. The roof hatch of the BMW 8 Series convertible model can be opened or closed in a record breaking 15 seconds.

The BMW X7 is unmistakable with its distinct front grille. This car brings to life the exhilarating combination of luxury and performance. The future version of the X7 is getting a facelift with a few minor changes to its exterior, making it aesthetically more appealing. The upcoming BMW X7 will include a 48-volt hybrid system for the xDrive40i. Other features to look forward to are heated seats, armrests, remote engine start, and great infotainment options.

The Chevrolet is introducing three new versions of the Silverado 1500 with exciting upgrades in technology and features. The advanced safety features is something worth looking forward to in this full sized pickup truck. The upgraded safety includes an emergency automatic braking system, a front braking system, and last but not least – a forward collision alert. The infotainment system includes an 8 inch touch screen and a Bose sound system. The vehicle also incorporates a fuel management system, which provides the option to shut down a cylinder when not required, resulting in higher fuel efficiency.

Chevrolet Corvette is a treat for the eyes with its elegant and neat look. The two-seater comes in two versions – a coup and a convertible. The Chevrolet Corvette’s V8 rear located engine delivers an outstanding performance which can easily compete with any exotic car. It has a well-trimmed cabin with limited cargo space at the back which is still capable of holding a golf bag despite its limitations. However, there is ample front trunk space. The safety features include a Buckle-to-Drive which means no seatbelt – no drive. The gear will not engage till the drivers’ seatbelt is on.

The Ford Ranger is a turbo charged 4 cylinder AWD with an automatic 10-speed transmission. This four door pickup truck has an excellent towing capacity competing well with the Gladiator and the Colorado.

The Ford Ranger has a very responsive and quick steering with a decent ground clearance and a solid steel bumper to comfortably make it through a rough terrain ride without any discomfort or scathing to the exterior of the vehicle. The interiors and infotainment are standard and not much to brag about. It does, however, include the Ford Co-Pilot 360 driver assist technology which aids in navigating through crowded areas.

The new Mercedes–AMG C63 R is going to break into the market with major changes by adding a hybrid option. The car is going to lose half its cylinders which will be replaced with a 48V motor, mounted on the gear box. The Mercedes–AMG C63 R is expected to have more power along with a 9 speed torque converter transmission. The hybrids drive train is expected to match the V8 engine output.

The Porsche Taycan is Porche’sMission E project to bring out an electric sedan to keep pace with the next gen in automobiles. The highlight of the Porsche Taycan is the turbo charging feature. It not only moves fast but charges fast as well. The current figures reveal that the car can do a 200 mile recharge in a mere 15 minutes.

The Lamborgini Urusis an unconventional SUV with a neatly chiseled body that doesn’t seem to conform to the standard SUV look. However, the super charged performance and other SUV capabilities of the car can cause you to rethink, as it is no less of a terror on the roads.

Lamborgini is introducing a customizable appearance option in its upcoming model – keeping the trademark of bright colours in the limelight. The newest model will sport a few black trims on the exterior including on the rear diffuser and the spoiler. Drive-assist features such as the cruise control and monitoring the blind spot along with several others nice features are worth looking forward to.

The Toyota Prius AWD-e is an all-electric wheel drive with several enticing features including heated seats and a heated steering wheel. The exterior design is not much to boast about, but the interior cabin is quite spacious.

The Toyota Prius is comfortably priced and very fuel efficient making it a good value for money buy. The newest model has reinforced safety features and an improved driver assistance system.

The Mazda 3 has adopted a sensational exterior design for its upcoming model. The swanky car can easily be mistaken for an ultra-luxury vehicle. The interiors of the Mazda 3 are no less than any luxury car giving them a run for their money. It includes a high-tech infotainment system. The Mazda 3 has enhanced safety features which include blind spot monitoring, head-on crash avoidance, a lane assist driving feature and also an alert which detects driver fatigue.

The Honda Insight is a lavishly stylish car that makes heads turn. This car can be classified as a hybrid version of the Honda Civic. It encompasses all the luxuries of the Civic and more, such as heated front seats, a remote engine start and a powered moon-roof. The Honda Insight ranks high for its fuel efficiency. The car also has a system to monitor the blind spot and warn the driver if something is in the blind spot range.