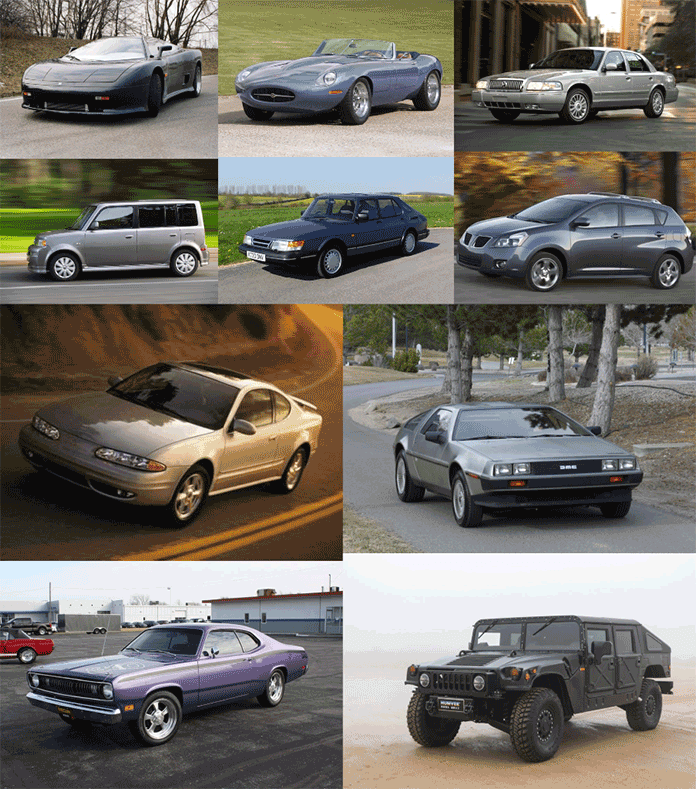 Over the passage of time we have witnessed numerous car manufacturers making cars that were a symbol of wealth and status. These cars are usually associated with the rich and famous. Most of the luxury cars in this category are unaffordable to the general public and are owned by a select society. Over the passage of time new luxury cars have been manufactured and quickly replaced the old ones. The older cars are considered outdated and many of them are not able to survive the sudden ousting. They become a part of a forgotten era as the rich continue to buy the newest luxury cars to maintain their status.

Some of the old luxury car brands are unheard of today as we have progressed to newer brands. Let us take a trip down memory lane and reminisce some of the cars that were once represented an epitome of status.

Saab is a Swedish car company. The company built ultra-luxury cars and had a very niche cliental. The Saab 92 was the first car model produced by Saab in 1949 after World War 2. The company witnessed a merger with Scania-Vabis and several years later launched the Saab 900. This car became a best seller and ruled the roost for quite a while. The success of the Saab 900 was followed by the launch of the Saab 9000. In 1989 General Motors bought 50% stake in the company. The joint leadership led to the release of two new Saab models – the Saab 9-3 and the Saab 9-5. However, in 2000 General Motors bought out the remaining 50% share of Saab. Ten years down the line Saab Automobiles AB was sold to Spyker Cars N.V. Though Saab had perfected a great engineering feat they catered to a select cliental which was not enough to sustain the company. As tastes and preferences changed the company was not able to keep up and finally went bankrupt in 2011.

The Pontiac was a luxury brand of cars by General Motors. The Pontiac was established to complement the existing GM luxury brand Oakland. However the Pontiac superseded Oakland and captured its cliental. The Pontiac cars became very popular and in 1960 Pontiac was named the performance division of the General Motors Company. Pontiac manufactured many popular sports and luxury cars. The brand is best remembered for the Firebird, a rear wheel drive car built on the F-body platform with a superfast V8 engine. Towards the latter end of the 2000s Pontiac was not selling to well and GM shut down the division to curtail financial losses.

Plymouth was created by Chrysler to enter the lower priced car segment which was mainly controlled by Chevrolet and Ford. Plymouth became an instant success and sales surged. The idea behind launching the Plymouth brand of cars was to cater to the general middle class section of society during the economic downtime of the Great Depression. With a great set of standard features the Plymouth became very popular. The Duster was the most famous and was manufactured from 1969 to 1976. Plymouth cars kept pace with the changing times and continued to release upgraded models and new cars. The cars did well, but as newer brands entered the market the popularity of the Plymouth dipped. By 2001 the sales had reached a very low level and Chrysler no longer considered it a profitable brand and shut down Plymouth.

Oldsmobile was a brand owned by General Motors. It was originally created by Ransom E. Olds in 1897. Oldsmobile was a luxury car brand that became famous for its creative designs and innovative technology. It was the first gas powered automobile brand to record such high sales volumes. The Oldsmobile survived for over a century but was finally dissolved in 2000 when the brand went bankrupt. The most famous Oldsmobile model was the 442. With its powerful V8 engine and rear wheel drive the car produced a horsepower between 160 and 400.

The Mercury was a mid-segment car brand that was created by the Ford Motor Company to fill the void that existed between its super luxury brand Lincoln and Ford, its affordable car brand. The Mercury competed with the Buick, Oldsmobile, Plymouth and Dodge. Over the years Mercury launched new models with the latest technology. The Mercury cars were popular and also featured in some movies adding to their popularity. The 99A, Eight Coupe, Mercury Station Wagon, Town Sedan and Mercury Eight Sedan are some of the most famous Mercury cars between 1930 and 1951. The recession of the late 1950’s had a negative impact on car sales and Ford Motors gave more importance to the Lincoln and Ford brands. The market eventually recovered but was never the same with more brands to compete against. By 2010 Ford Motor Company shut down Mercury.

The Hummer was a brand lunched by AM Generalin 1992 when they decided to sell the M998 Humvee in the civilian market. In 1998 the brand was bought over by General Motors. They launched three vehicles namely the Hummer H1 which was a prototype of the Humvee, and the H2 and H3 were vehicles more suited to the domestic market. The recession of 2008 impacted the Hummer sales and the viability was analyzed. The brand was defunct in 2010.

Tatra is a Czech car company which was established in 1850, but only started manufacturing cars in 1897. Tatra was a leading car manufacturer before communism flourished in Czechoslovakia. They manufactured high end cars with innovative engineering. The Tatra limousine had an advanced V8 engine which was water cooled. The car had a 215 horsepower and a could go upto a speed of 153 mph. Worth noting was its swift acceleration which clocks 0-60mph in 5.2 seconds. The post war Tatra cars were luxurious and also very fast. The company stopped manufacturing cars in 1999, but still manufacturers trucks.

Eagle was a brand owned by Chrysler Corporation. Though the Eagle was hardly around for 11 years they sold over 115,000 cars. The cars were modeled more to suit the European taste than the American market. The Vision and Talon are the most famous Eagle cars. The powerful Vision was a luxury sedan with a front wheel drive and a V6 engine. The Eagle Talow was another great 3 door liftback with a powerful turbo engine. The Eagle was phased out in 1998.

The Scion was a sports compact vehicle brand belonging to Toyota automobile. It was an affordably priced stylish car aimed for the younger crowd launched in 2003. The base model had a few standard features but buyers could customize their cars with a variety of trims to suit their preference and budget. The car did well and sales hit an all-time high in 2006. However the Global Financial Crisis 2007-2008 resulted in a drop of sales and the brand was unable to sustain. It was defunct in 2016. The most famous was the Scion xB RS 6.0. Some of the better selling Scion cars were rebranded and sold under the Toyota name.

The DeLorean Motor Company had a short life from 1975 to 1982. It is well remembered for its famous stainless-steel sports car which had gull-wing doors, at the time it was a futuristic design. The DeLorean car caught the eye of a movie producer and was featured in the movie trilogy “Back to the Future’ as a time machine. The car had rear-wheel drive and was powered by a V6 engine. The DeLorean car was exceptionally durable and it is believed that several thousand DeLorean cars are still on the roads. The cars were manufactured in Northern Ireland and shipped to the United States. In 1982 the DeLorean Motor Company was not able to raise the capital to stay afloat and went bankrupt, putting an end to the futuristic stainless steel cars.